our BC2 servers - base protections

Even if we all experience less and less players in this lovely game and constant login issues of player accounts @ EA account servers, we still had some fun altering and playing around with a couple of extra coding features being added.

It has been an old story that players complain about starting base protections and here at these forum I believe we got enough discussion about it over the past years.

However during the last few months more and more steady players became "experts" in using the base protection rules to their advantage in achieving kills while staying home so to speak and not moving out the base in order to battle on the field.

Therefore a new control mechanism has been put in place assuming to address this behavior in warning and killing as well temp banning a player performing base camping extrem playing styles.

If you are still an active player of Bad Company 2 and you are still gathering together for a couple rounds on our servers, feel free to feedback if it works out as it should or if there are any values you consider to be adjusted.

What exactly are the new mechanics?
Yesterday I played two rounds, but didn't notice any difference despite 6 teammates sniping form our base.

Felt good after such a long break. Turns out that I am not as rusty as I believed to be. 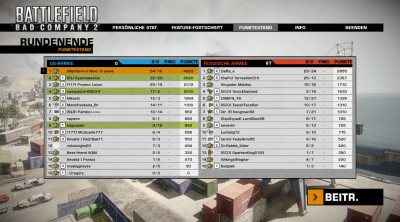 Nino-6-years wrote: ↑
25 Oct 2021, 22:55
What exactly are the new mechanics?
Yesterday I played two rounds, but didn't notice any difference despite 6 teammates sniping form our base.

Hmmm ... I believe it requires more rounds to be fully tested ...

You should be able to spot public messages like "player ... this is your x. warning killing from base protection" in example. Currently set to warn 1 time, second time apply an admin kill, 3rd another warning, 4th time temp ban.

People are camping as snipers outside the base now.

Based on little qualified feedback (and not just babbling nonsense in the ingame chat) and several test rounds, the settings were constantly adjusted and made better for each map.

Shooting from the own base and killing enemies (aka base camping) needs to be differentiated from losing all flags and trying to get out of your base while killing enemies in front of it, which are waiting for you to come out. Therefore the "base camping rules" have been slightly simplified running since a few weeks pretty well, although there will never be a perfect solution to it.

Somebody killing from his own base will receive a warning. After the 4th kill you will be automatically admin killed. The 5th kill will be a warning again, 6th kill a kick, so you will need to re-join the server.

The counter get reset after a round ends, or if you had to re-join the server.

Although it remains strange to me how many players are "commenting" about these rules in place within the ingame chat, its rather unlogical why players - being so much interested to comment - are not writing here at the forums. The only place to be to get a steady and historical correct reading ...

Couple of changes got implemented or confirmed:

BASE RAPE
Of course it is rather impossible to determine a border line and 80 meters ingame. In addition you need to know that the BC2 server reports killer and victim locations with a slight random error, so it can never be 100% precise all the time.

I designed the limits in a way that you are almost safe shooting into a base, if you are nearby the first flag location towards the enemy base. Of course this differs slightly depending on the map currently running, due to its map design. But bottom line, be at the first flag or further away from the base, you can kill with vehicles or recons weapons easily any possible base camper.

Luckily we got less base camper than base raper ... but still, camping within your starting base knowing about above base rape protection, is just not what we are looking for. Go out and fight on the battlefield soldier!

However, the following technics are in place:
A couple of scenarios need to be taken in consideration. It can happen that your team gets stuck in your base, due to owning no flag location anymore. In this case you will spawn and you need to fight either against base raper or lovely enemy soldiers waiting outside your base uppon your appearance. Therefore the first notices are just private and do not harm at all.

But if you kill five or more enemies from your starting base, we highly assume you are a base camper.


We appreciate any feedback from active players about its ingame performance.